Porto Fluviale. Narrative of a urban adventure and a new idea of Piazza. 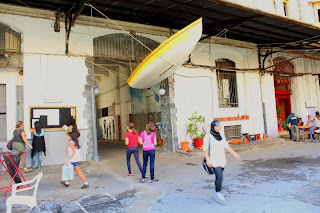 When we first received the proposal by the Development Planning Unit to organise the SummerLab in Rome, particularly in the squatting Porto Fluviale we (Laboratorio Arti Civiche) initially had some reserves. Mainly because we didn’t feel at ease to act as “guides” in a context in which we were just starting to build a relation. This story tells the evolution of a project, from its slim beginning to its rampant launch.
As Laboratorio Arti Civiche we act as a multidisciplinary research group with a particular interest on elaborating, together with social groups and local communities, a collective and shared vision over urban space, trough the means of ‘Civic Arts’.
The Dpu SummerLab was carried out in collaboration with Porto Fluviale, a former military building that the State is intentioned to sell to private investors and that in 2003 was occupied by Coordinamento di Lotta per la Casa, one of the several roman movements claiming the Right to Dwell, and that gives shelter to about 100 families, both italians and migrants, in housing emergency.
The workshop has been the opportunity to kick-start a process that was already in the air for a while.

The group of students came from all over the world: there were a lebanese, a lebanese-venezuelan, a lebanerse-armenian, a portuguese, a mexican-american, a french-swiss and two italians. Their multi-culturality matched the one of the inhabitants of Porto, and their overnight stay at the occupation intensified the relationship among them. After having visited several roman projects that were interesting for interpreting in different ways the notion of ‘occupation’, we finally could start to concentrate on Porto Fluviale.
The Tea Room soon became our office. It is a space that was born one year ago thanks to the work of Margherita Pisano, a PhD student of La Sapienza University, together with the inhabitants of Porto, as a place where to share knowledge while drinking a cup of tea, pretty much acting as a meeting place between the inhabitants of Porto and the neighborhood. It is in this space that we did the presentations, discuss the proposals and where we started to realize the first suggestions on the idea of Piazza that the Porto Fluviale is looking forward to realize. The students were divided into groups and were assigned the task to address the realization of a ‘public’ Piazza from different entry points, with the idea to come up with some proposals to be presented to the inhabitants on Friday, and to a wider audience on Saturday. Saturday in fact was the day in which the gate of the occupation would have been finally opened to the city, and the courtyard of Porto Fluviale would become a new meeting place and ‘stage for interaction’ with the neighborhood. How does the occupation want to present itself to the neighborhood? What is the proposal the inhabitants want to make to the ‘outside’? What vision do they want to share?
The students came up with several proposals that the inhabitants found quite interesting and were thinking to realize soon, at least some of them. For example they were quite interested in the idea of developing a ‘monumental garden’ in the courtyard to invite the passers-by to cross the threshold of the big gate of the occupation, which will be often left open during the day. Another proposal they were interested in was to realize a mural painting on the main facade, as well as on the lateral one, to attract attention while suggesting the creative use of space that is taking place behind the rigorous military image that the building projects to the outside.

In the meantime Laboratorio Arti Civiche kept working on the idea that was initially presented to the assembly some months before, about recuperating the image of river port    (Porto Fluviale) that the occupation refers to, and to propose it as the main narrative in the ‘dialogue’ with the neighborhood. The idea is to introduce Porto Fluviale as a welcoming and inclusive place, a secure port where the different cultures that populate it could moor. It is towards the construction of this imaginary that the idea of populating the Piazza with boats came about. Why don’t we bring several boats in the courtyard? Why don’t we use the boats to give body and substance, in a poetic manner, to the image of a river port (Porto Fluviale) as a welcoming place where different cultures could not only be received, but together experiment inedited forms of intercultural dwelling? Many boats to build together a new proposal of city and citizenship: the courtyard of the occupation opens itself to the city by offering an inedited ‘public’ space, governed and designed by the logics of knowledge exchange and skill sharing rather than the market-driven ones. The proposal was greatly welcomed by the inhabitants. Therefore, on Thursday, Francesco went to pick up the first boat, a yellow one, that was donated at the nearby lake of Bracciano, and that became the opportunity to discuss the different possible uses it could incorporate. The inhabitants started to envision different possibilities, from a ‘boat of adventures’ for the kids, to a big flowerpot, or vegetable garden and so on, the boat soon became the object that would encompass the different visions and aspirations of the inhabitants over the space of the new Piazza. After several discussions, the first boat was finally dedicated to become a symbol and an invitation to take part to this new urban adventure, standing proudly with the prow towards the future and climbing up against the wind, always straight ahead!

Given the enthusiasm of the first day of opening, we thought we could go on with this idea of the boats, to build together this new urban proposal: from internal courtyard of a housing occupation, to ‘public’ space for the neighborhood, the Piazza del Porto Fluviale is opening its gates to the city offering a space for sharing and exchange and to build together a new idea of city and citizenship.
Porto Fluviale becomes the place were people that cannot access a house, the migrants, and the ones that simply believe in a different way of dwelling the urban space, can start to realize together, day by day, their Utopia. 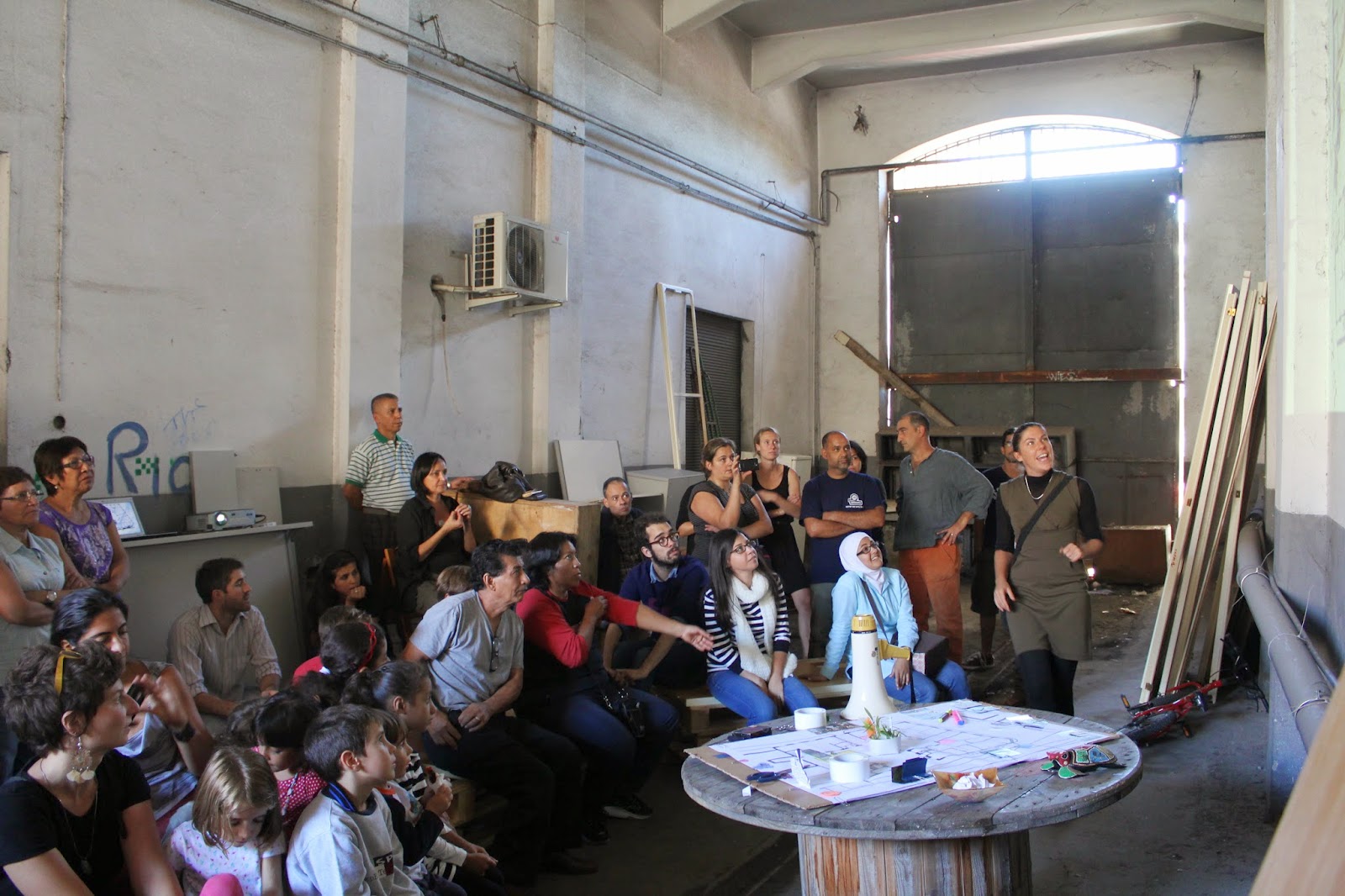 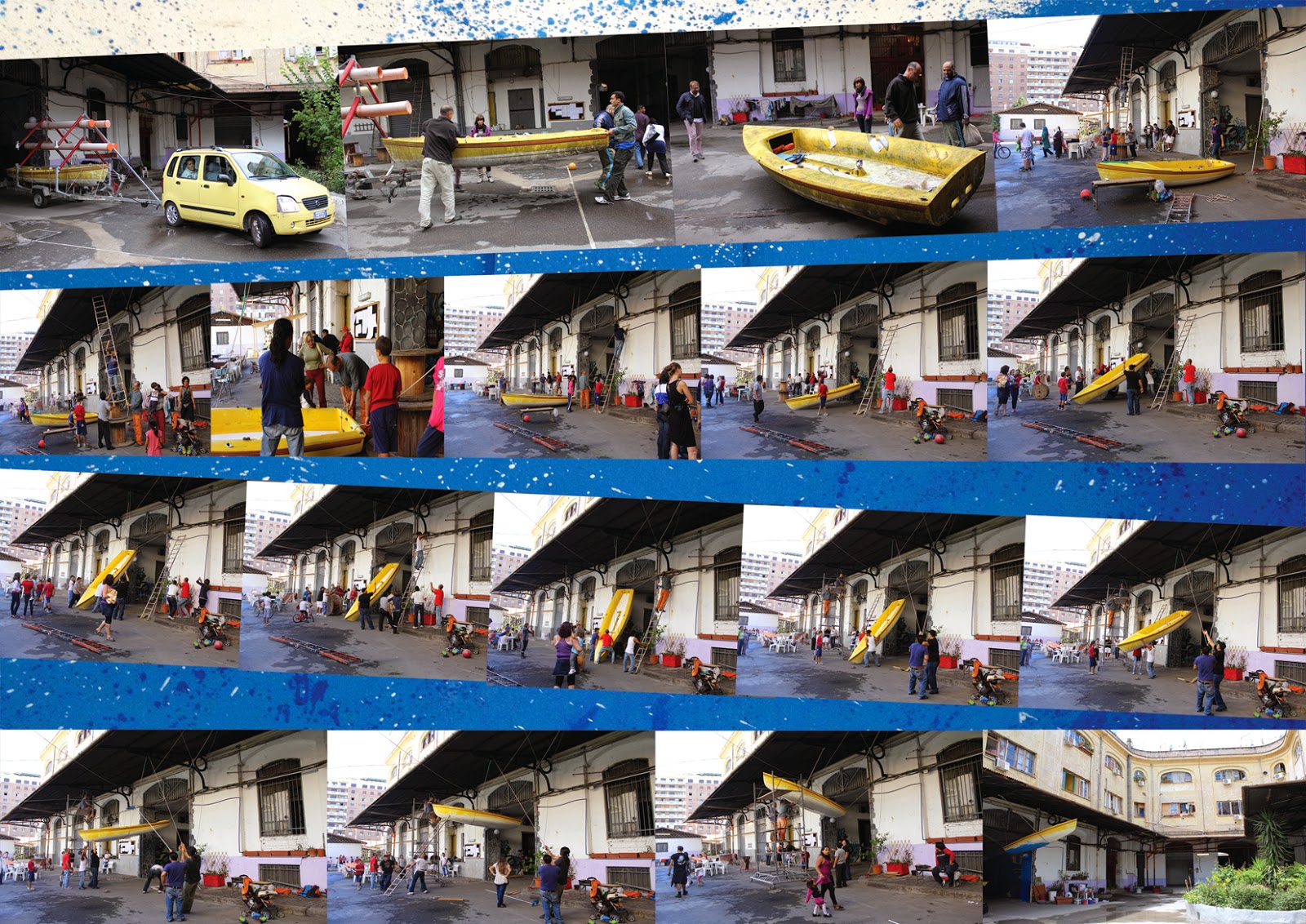 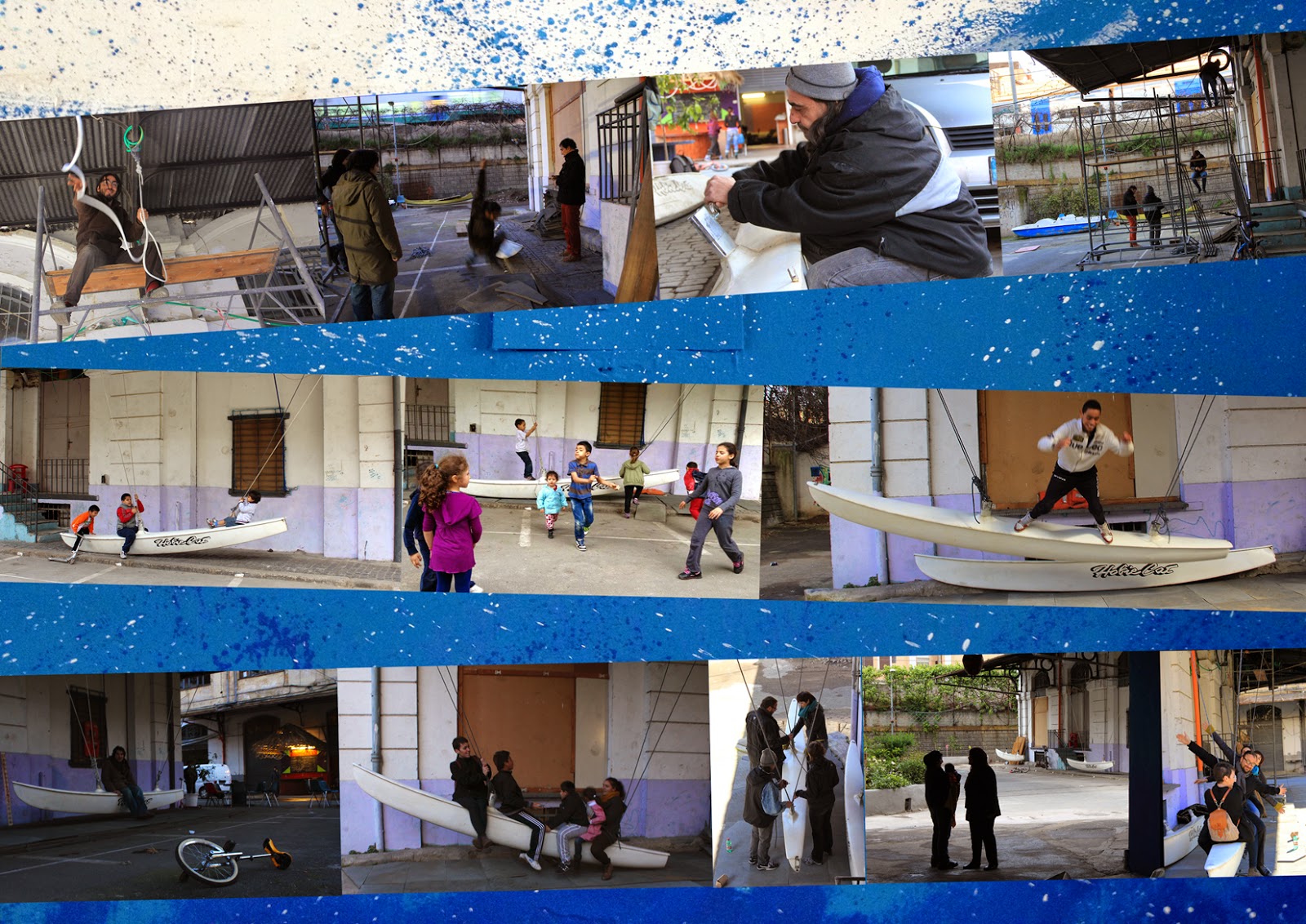 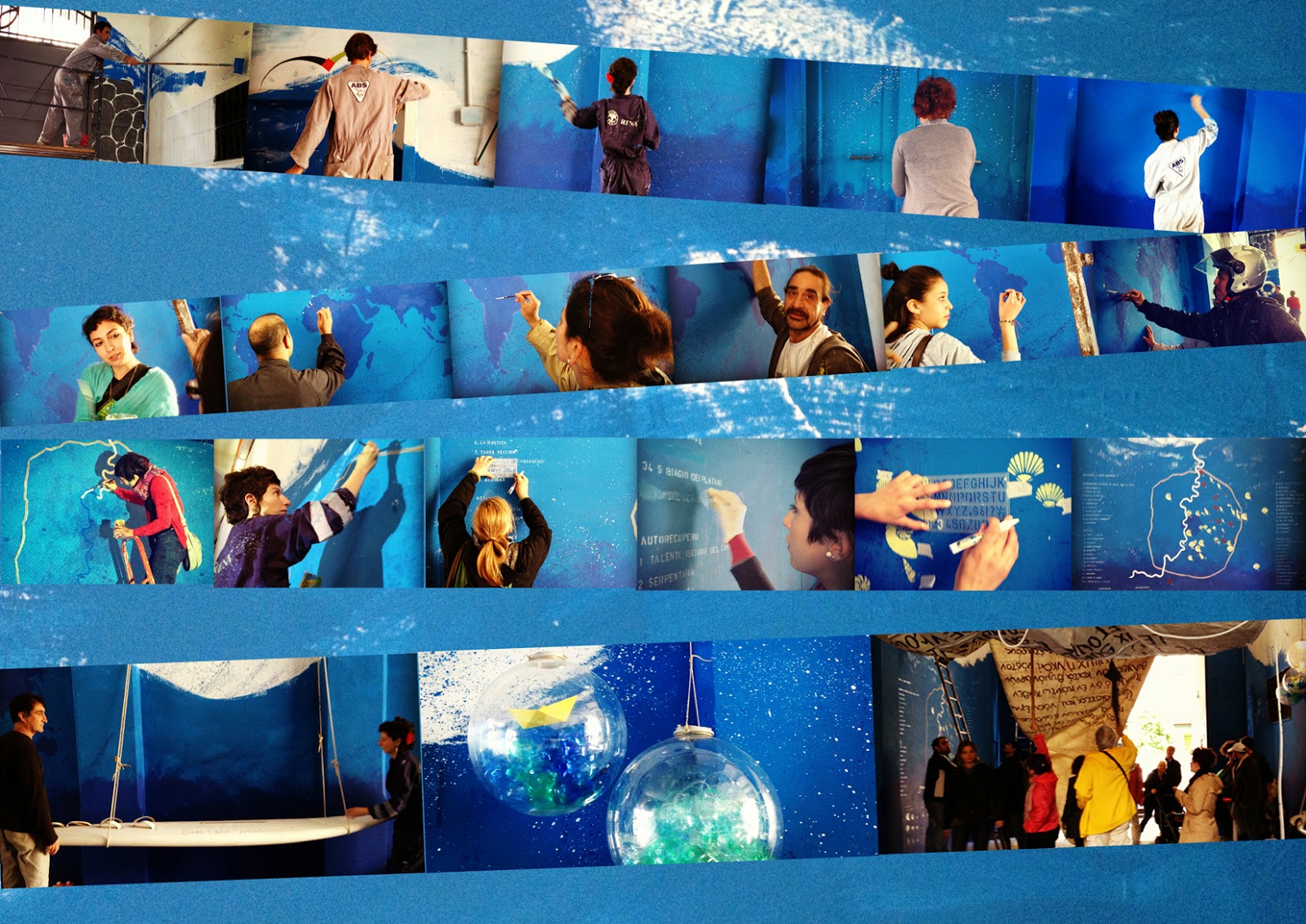 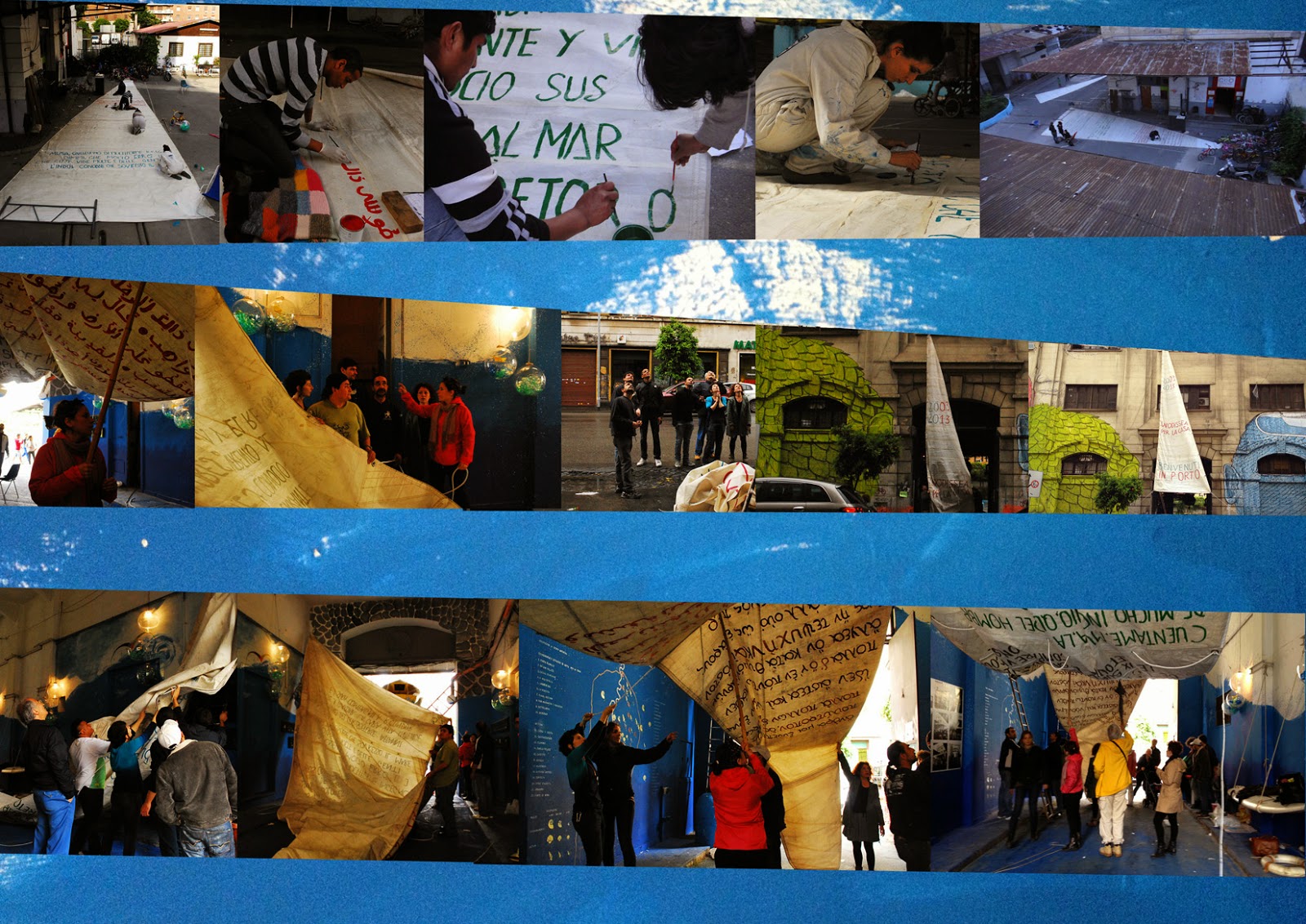